Scientology Volunteer Ministers in Southern and Eastern Africa respond to Cyclone Idai, described by the United Nations as one of the worst weather-related disasters ever experienced in the Southern Hemisphere.

GRUDJA, Mozambique, April 6, 2019 (Newswire.com) - When Cyclone Idai made landfall in the Mozambique port city of Beira on March 14, its storm surge destroyed an estimated 90 percent of the area and continued west through Zimbabwe and Malawi. Damage rendered much of the region inaccessible.

Scientology Volunteer Ministers (VMs) from South Africa, Kenya and Uganda immediately mobilized to bring urgently needed help to the more than 500,000 displaced by the storm.

Arriving in Grudja, Mozambique, the first team of Volunteer Ministers met with local tribal chiefs and began distributing supplies they brought to the region. “We gave some food and clothing to a grandmother who lost everything in the cyclone,” said one of the volunteers. “She had gone for days without food and now she could feed her two grandchildren.” They handed out food, water clothing, soap, baby supplies and blankets.

As many as 1.7 million have been affected in Mozambique. The World Food Program estimates 920,000 people were affected in Malawi and 15,000 in Zimbabwe. Doctors Without Borders says flooding in Malawi has displaced 87,000, with the district of Makhanga cut off from all road access. In Mozambique, some 500,000 people were left homeless and the cyclone has destroyed the lives and livelihoods of hundreds of thousands more.

Scientology Volunteer Ministers headquarters in Los Angeles has sent veteran VMs from the U.S. and Mexico’s Los Topos search and rescue team. VMs from as far away as India are making plans to join the disaster response.

Trained VMs who can deploy should contact Volunteer Ministers Headquarters at (800) 435-7498. 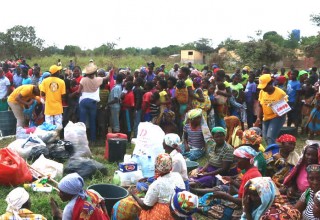 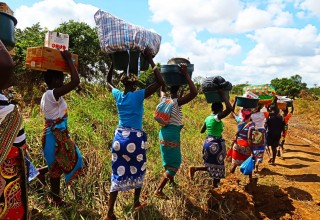 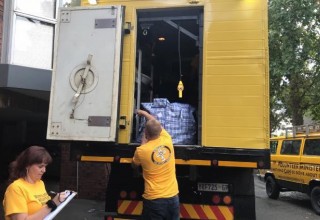