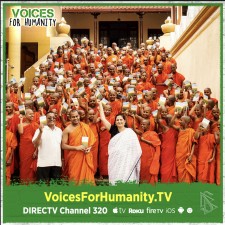 For nearly 30 years, civil war has torn Sri Lanka apart, driven by religious factions intolerant of one another. Naseema Qureshi is a peace advocate working to build tolerance between the numerous ethnic and religious groups that call Sri Lanka home. She spreads a message of coexistence that is gaining popularity throughout the country and is helping to build lasting peace across the nation.

Born into the politically turbulent times of Pakistan in the 1960s, Naseema Qureshi was witness to the rise of terrorism and civil rioting. Early on, she began seeking answers to effectively guide society onto a path of peace. Naseema first became involved in Sri Lanka after the tsunami in 2005 when she was part of a disaster response team volunteering to help the island recover. Amidst the ruin of the tsunami was the rubble of war, Sri Lanka was a nation that needed help — help that Naseema would bring a few years later in the form of The Way to Happiness. With its common-sense values and morals, Naseema found the solution to healing the rift of religious intolerance that had left such deep scars in Sri Lanka. She introduced the program to a Presidential Task Force member in the Sri Lankan government and they implemented it across the country. Today, this program is widely used in schools and government institutions across all of Sri Lanka.   ​

The Scientology Network debuted March 12, 2018. Since launching, it has been viewed in 240 countries and territories in 17 languages. Satisfying curiosity about Scientology, the network takes viewers across six continents, spotlighting the everyday lives of Scientologists, showing the church as a global organization, and presenting its social betterment programs that have touched the lives of millions. The network also showcases documentaries by independent filmmakers who represent a cross-section of cultures and faiths, but share a common purpose of uplifting communities.

Broadcast from Scientology Media Productions, the church’s global media center in Los Angeles, Scientology Network can be streamed at Scientology.tv and is available through satellite television on DIRECTV Channel 320, mobile apps and the Roku, Amazon Fire and Apple TV platforms.