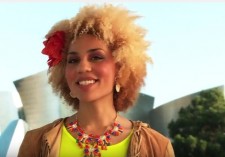 Singer-songwriter Joy Villa delivers a contagious exuberance with every song she sings.

Los Angeles, California, October 10, 2016 (Newswire.com) - Joy Villa is a singer-songwriter whose music is pop rock with a little bit of a flair for the 90s and a hip-hop influence.  She says learning Scientology helped her reach higher than she ever thought possible.

Villa found Scientology at a dark time in her life.

Although she couldn’t put her finger on what was going on, she sensed certain relationships were bringing her down. “I was dating a guy who was just no good. I had friends around me that were no good.”

Her first Scientology course was called Overcoming Ups and Downs in Life. “That changed my life,” she says. “Immediately I started making leaps and bounds in my artwork and the types of people I was attracting. It seemed like it went from dark to light almost instantly.”

As she progressed in her Scientology training, she found she had regained her positive attitude. “I was getting more yeses instead of nos,” she says. “I had that confidence that I was looking for.”

It also made a huge difference in another aspect of her life.

“I began to have a deeper relationship with my dad,” she says. “I began to know him in a way that I didn’t think was possible. Even towards the end of his life, I was there for him. And that was the most special thing. That was a gift that Scientology gave me.”

Villa pursues her goals with enthusiasm and flair. “If there’s a stage, I want to jump on there—I want to share art. I want to communicate with people,” she says. Her purpose is to reach as many people as she can with the message that they can be better and that art is a way to heal the world.

“Now, I feel like there’s nothing I can’t tackle,” says Villa. “Scientology gave me tools to survive, tools to create, and that’s what I feel like—a creative person who is full of power and there is no stopping me.”

The popular Meet a Scientologist video profiles on the Church of Scientology International Video Channel at Scientology.org reflect the diverse backgrounds and walks of life of Scientologists around the world. Meet Scientologists including educators, teenagers, sports enthusiasts, dancers, managers, mothers, fathers, dentists, photographers, actors, musicians, fashion designers, engineers, students and business owners and find out what Scientology means to them personally.

A digital pioneer and leader in the online religious community, the Church of Scientology was the first major religion to launch its own official YouTube Video Channel, which has been viewed by millions of visitors.

​Read the article on the Scientology Newsroom.