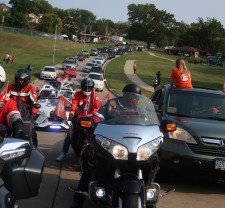 Churches and nonprofits come together on International Peace Day to bring peace to the streets of Greater Kansas City where more than 200 have died by violence so far this year. The community action was organized by the Church of Scientology Kansas City in partnership with Councilman for the 3rd District-at-Large Brandon Ellington, United in Peace Foundation and The Way to Happiness Foundation.

KANSAS CITY, Miss., September 27, 2020 (Newswire.com) - The sound of revving motors filled Spring Valley Park September 20 as 143 motorbikes, souped-up cars and 4-wheelers lined up for the first United in Peace Ride through Greater Kansas City. United in Peace is a multiethnic, multifaith movement that began in Los Angeles, where it has lowered crime rates and helped broker peace among hostile gangs.

United in Peace uses The Way to Happiness, the common-sense moral code written by humanitarian L. Ron Hubbard, to promote a climate of unity and peace, counter violence, reverse the climbing homicide rate, and undercut other pressing social issues.

Among those spearheading the KC campaign were nonprofits, the KCPD and the Greater Kansas City Interfaith Council.

Riders and guests gathered at Spring Valley Park at 3 where Bennette Seaman, spokesperson for the Church of Scientology of Kansas City, welcomed and thanked those attending for coming together in the name of peace.

After an hour of entertainment by local drill teams and other artists, Councilman Ellington and a KCPD officer led riders of all faiths, races, backgrounds and walks of life on the 16-mile route through Kansas City, Missouri, and Kansas City, Kansas, for an afternoon filled with hope, unity, and a sense of community.

Councilman Ellington spoke of his desire to help the people of the city so they can find a better way to live, not through crime and violence, but with peace and respect and by stepping up and doing the right thing. “The book The Way to Happiness is going to help me reach the people in this city who really don’t want to live this way, the ones who just need a hand up, a reason to change, to be and do better for themselves, their families, and their neighborhoods,” he said.

The Way to Happiness is a nonreligious common-sense guide to better living. Through its 21 precepts, it brings about an increase in tolerance and understanding, making a safer, less violent world for all.