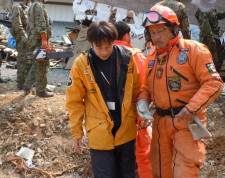 Famed search-and-rescue specialists Los Topos, featured on a National Geographic documentary for their work following the 2011 Japan earthquake and tsunami, add their skill and muscle to the fight against time to locate survivors in the rubble of the Haiti earthquake

LES CAYES, Haiti, August 26, 2021 (Newswire.com) - A team of search-and-rescue specialists and highly trained Volunteer Ministers flew out of Miami today, headed for Port-au-Prince. There they continue their journey to Les Cayes by the fastest means possible to join the search-and-rescue teams scouring the rubble for more than 300 people still missing from the Aug. 14 7.2 magnitude earthquake. They will also connect with some 100 Haitian Volunteer Ministers who immediately deployed and have been providing relief in their communities since the disaster occurred.

Los Topos, led by founder Héctor "El Chino" Méndez, has partnered with Scientology Volunteer Ministers (VMs) at major disaster sites for more than a decade. It was in 2010 in Haiti, after the 7.0 magnitude earthquake, that they first formed a partnership. Together, they have responded to the Japan earthquake and tsunami in 2011, the Nepal earthquake in 2015, the Mexico earthquake in 2017, and numerous other natural disasters.

Los Topos means "the moles" in Spanish — a nickname earned for their ability to enter impenetrable rubble through impossibly narrow and precarious openings to rescue buried survivors.

In creating the program in the mid-1970s, Scientology founder L. Ron Hubbard wrote that a Volunteer Minister "helps his fellow man on a volunteer basis by restoring truth and spiritual values to the lives of others. … A Volunteer Minister does not shut his eyes to the pain, evil and injustice of existence. Rather, he is trained to handle these things and help others achieve relief from them and new personal strength as well."

With the events of the 9/11 terrorist attacks in New York City, Scientology ecclesiastical leader David Miscavige called on Scientologists to redouble their efforts to aid their fellow man. He issued a directive entitled "The Wake-Up Call," which has inspired exponential growth within the Volunteer Minister program.