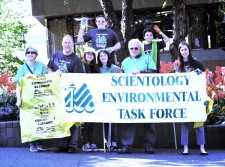 In Seattle, The Way to Happiness inspires people to take responsibility for their environment and to care for their neighborhoods.

SEATTLE, May 23, 2019 (Newswire.com) - ​This month marks the city of Seattle’s 25th annual celebration of Neighbor Day—"a special day set aside to reach out to neighbors, make new friends and express thanks to those who help make your neighborhood a great place to live.​"

The Seattle chapter of The Way to Happiness Foundation and the Scientology Environmental Task Force took to the streets on Neighbor Day to tackle litter in the Seattle Center neighborhood—home of Seattle’s iconic Space Needle.

The groups also participated in Seattle Public Utilities Spring Clean—Seattle’s premier cleanup event held each year in April and May. The Scientology Environmental Task Force has been an active participant in the Seattle Public Utilities Adopt-A-Street program for nearly 30 years—longer than any other organization—and has been recognized for the thousands of hours of work that volunteers have contributed to cleaning up Seattle streets and parks.

Written by humanitarian and author L. Ron Hubbard, The Way to Happiness contains 21 basic principles that guide one to a better quality of life, including the precept: “Safeguard and Improve Your Environment,” which states:

“There are many things one can do to help take care of the planet. They begin with the idea that one should. They progress with suggesting to others they should. Man has gotten up to the potential of destroying the planet. He must be pushed on up to the capability and actions of saving it. It is, after all, what we’re standing on.”

The Way to Happiness has been embraced by more than 250,000 groups and individuals, with some 117 million copies distributed in 186 nations. The Church of Scientology and its members are proud to share the tools for happier living contained in The Way to Happiness.