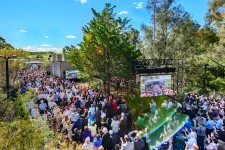 Sydney, Australia, September 4, 2016 (Newswire.com) - Just ten minutes from Sydney’s city center, yet a world away amid 900 acres of arboreal forest in the Lane Cove National Park, the stunning new spiritual home for the Church of Scientology was inaugurated before thousands at its dedication on Sunday, September 4.

“Today we mark yet another monumental done with a grand opening that is positively like no other,” said David Miscavige, Chairman of the Board of the Religious Technology Center and ecclesiastical leader of the Scientology religion. “For where else can you dedicate a new Scientology Advanced Organization as breathtaking as this? Or for that matter, where else can you offer the timeless freedom of eternity to the most populated zone on Earth? Well, that is exactly what we inaugurate today as we cut the ribbon on your new Ideal Advanced Organization for Australasia!”

The Church’s newest and largest spiritual center outside the United States is destined to be a beacon of freedom for the Asia Pacific region. An architectural masterpiece with soaring windows that open onto views of the national park, where kookaburras trill at dawn and dusk, the massive and masterfully-restored 145,000-square-foot building is a physical wonder that gives meaning to the spirit of Scientology itself.

Describing how he “first laid eyes on this arboreal palace nestled at the rim of a eucalyptus wonderland,” Mr. Miscavige said, “the most descriptive phrase beyond ‘mind-blowing’ was, ‘perfectly perfect.’ Well, so too, is the timing of your grand opening.”

The historic event comes in the wake of a new Golden Age for higher states of spiritual awareness in Scientology. It’s a Golden Age comprising yet another monumental achievement in making Scientology technology available. They include Founder L. Ron Hubbard’s original Advanced Course film lectures now fully restored, and advanced materials extending to the upper reaches of the Bridge to Total Freedom, which have been translated into 17 languages, including Chinese and Japanese. Consequently, Scientologists are ascending the Bridge at seven times earlier numbers.

The new Ideal Advanced Scientology Organization is equipped to accommodate these numbers with facilities that include a Hubbard Guidance Center, replete with 60 auditing (spiritual counseling) rooms, course rooms for the training and guidance of Solo auditing (parishioners auditing themselves through the state of Clear and Advanced Levels), and course rooms for the training of auditors to serve in Scientology Organizations across the Asia Pacific.

The expansive facility also houses a new Ideal Continental Liaison Office for the ecclesiastical management of every sector of Scientology in the region. That includes Scientology Churches, Missions and affiliated groups, as well as the establishment and expansion of Church-supported humanitarian initiatives and social betterment programs.

The ultra-modern structure presents a minimalist style with multi-story glass blending into a striking concrete landscape. Outside, the Blue Gum Creek wends its way through the 8.5-acre eucalyptus forest, a virtual Garden of Eden in the heart of Sydney’s metropolitan area.

That one-of-a-kind locale was the site of convergence for the more than 2,500 Scientologists and their guests on Sunday who came together to celebrate this remarkable achievement. Joining them were city and national dignitaries partaking in the occasion.

Ms. Le Lam, Mayor Emeritus and Chairwoman of the Asian Cultural Association for Greater Sydney, said in her opening address, “This facility that serves as your new continental home is particularly unique. As you can see, the building itself has many extraordinary features—both its size and design are impressive, to say the least. In fact, it was nominated for official listing as a ‘significant city structure’ contributing to the heritage of this city. And by establishing this new center as your spiritual hub, you have bestowed a purpose upon this grand facility that transcends beyond even its physical beauty.”

Dr. Amin Hady, former religious advisor to the Australian Prime Minister, also recognized the facility’s important Asia Pacific role, “Scientology has so many resources, and I am very optimistic that those resources will offer not only hope, but also practical solutions to people desperately in need of a lifeline. The responsibility for change lies not just with government officials, but with each of us, with you and me—every citizen. Only by inspiring individuals to transform from spectators into participants, we can win the society we wish for. And my wish is for a drug-free Indonesia and a drug-free Asia. With the help of Scientology and its programs, I believe we can achieve it.”

Ms. Gracelyn Smallwood, international human rights activist, recipient of the Order of Australia and a professor at James Cook University, noted that “The Scientology Volunteer Ministers have responded to more than 40 disasters across Australasia, including the Victorian bushfires, Japan’s Fukushima earthquake and the South Asian tsunami. And with your Goodwill Tours crisscrossing these lands, the Volunteer Ministers have spread their techniques at a grassroots level, training 100,000 locals in Scientology’s practical and holistic approach. You leave a village empowered to help and heal themselves. So, yes, when I see those yellow tents, I see hope.”

Dr. Keith Thompson, Associate Dean, University of Notre Dame, echoed those sentiments. “It’s been said that ‘by their fruit you shall know them.’ And today through your new spiritual center for Asia Pacific and your continuing commitment to serve others, we can bear witness to your fruit,” he said. “Through this facility, I am certain you will help create an interchange and dialogue to foster a strong interfaith community, a community built on respect. And so I wish you well in your noble and sacred endeavors. As you continue and strive to help others realize the greatness that is within them, you will be striving towards eternity and eternal greatness yourselves.”

Dr. David Bennett AC, QC and former Solicitor General of Australia, who led and won the Supreme Court case that redefined religion and established religious recognition for Scientology, said: “Out of all the cases that I have been involved in, I count your victory affirming that Scientology is a religion as the one that makes me the most proud, because since that time, courts around the world have relied on the Australian definition. And so, to be here celebrating with all of you, well, I see just what can result from a dramatic and revolutionary court victory in the name of religious freedom. And, it makes me even more proud to know that what began as a fight for what is fair, led to a decision that has spread across the world to guarantee the rights of people of all faiths.”

As he prepared to cut the ribbon on a new future for Scientology in Australasia, Mr. Miscavige observed its significance: “And, with that, we come to the final minutes before those doors open on eternity. As such, this is the perfect moment to reflect on what it means to now possess an Ideal Advanced Org that’s virtually out of this world. And so, in honor of our Founder’s everlasting dream, I hereby dedicate this new ideal spiritual gateway in the name of L. Ron Hubbard and Total Freedom.”

The dedication of the Ideal Advanced Organization and Saint Hill for Australia, New Zealand and all of Asia comes during a period of epic expansion for the religion. Under Mr. Miscavige’s leadership the Church of Scientology has opened the doors of more than 50 new Ideal Churches across six continents. Recent openings have taken place in Harlem, New York; Budapest, Hungary; Atlanta, Georgia; Milan, Italy; Tokyo, Japan; Bogotá, Colombia; and Basel, Switzerland.

The Church recently opened Scientology Media Productions as well, a five-acre, technologically cutting-edge studio in Hollywood, California, in which the religion’s message will be proclaimed via television and radio broadcasting, Internet and social media and every other media platform.