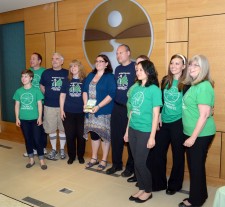 Seattle, Washington, June 15, 2016 (Newswire.com) - The Church of Scientology Seattle commemorated World Environment Day with an open house featuring the Seattle Public Utilities Adopt-A-Street program, which has gained national prominence as one of the most effective and efficient grassroots litter-removal initiatives in the U.S.

Members of the community came together to learn more about this vital city program and signed up to join the more than 700 active volunteer groups that regularly clean up nearly 200 miles of streets in and around Seattle.

"Man has gotten up to the potential of destroying the planet. He must be pushed on up to the capability and actions of saving it. It is, after all, what we're standing on."

Catherine Foster, the city’s Adopt-A-Street Volunteer Coordinator and keynote speaker at the open house, emphasized the importance of more groups and individuals getting involved in cleaning their neighborhoods. She congratulated the Church of Scientology Environmental Task Force for its longstanding work in the community. The Scientology group has been an active participant in Adopt-A-Street for more than 25 years—longer than any other group or activity.

Scientology Environmental Task Force coordinator Dave Scattergood congratulated the volunteers, who have contributed thousands of hours of environmental work cleaning up Seattle streets and parks, and noted that two of Seattle’s former mayors, Greg Nickels and Mike McGinn, recognized the group for its environmental activism.

Written by humanitarian and author L. Ron Hubbard, The Way to Happiness, contains 21 basic principles that guide one to a better quality of life, includes the precept: “Safeguard and Improve Your Environment,” which states:

“There are many things one can do to help take care of the planet. They begin with the idea that one should. They progress with suggesting to others they should.

Man has gotten up to the potential of destroying the planet. He must be pushed on up to the capability and actions of saving it.

It is, after all, what we’re standing on.”