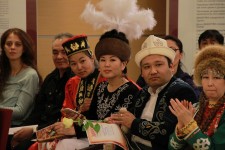 At the "Music is Timeless" concert and festival at the Church of Scientology Moscow December 18, artists from 12 distinct ethnic traditions performed a living demonstration that music can unite peoples and transcend cultural differences.

“Music is Timeless” was co-organized by the Church of Scientology and the Centre of Preservation and Development of Cultures of the Peoples of the World.

The Church screened several brief videos from The Way to Happiness, a moral code written by humanitarian and Scientology Founder L. Ron Hubbard that also transcends ethnic and religious differences with its common-sense precepts.

“The language of music knows no boundaries,” said a Moscow lawyer who attended the program. “It unites peoples of different countries and believers of all faiths.”

An advisor to a deputy of the State Duma commented on the richness of the ethnic traditions represented.

Guests and performers toured the Church’s Public Information Center and learned more about Mr. Hubbard, The Way to Happiness and other humanitarian programs the Church supports that address and resolve social issues affecting all countries and cultures today.

The Church of Scientology Moscow opened its new home February 26, 2011, in the city’s central Garden Ring, just a mile from Red Square. An Ideal Scientology Organization, its facilities are configured to service Scientologists in their ascent to spiritual freedom and serve as a home for the entire community—a meeting ground of cooperative effort to uplift citizens of all denominations.