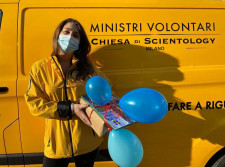 "Is there anything you need? Call our hotline" say the Scientology Volunteer Ministers of the Church of Scientology of Milano.

MILAN, January 8, 2021 (Newswire.com) - For the past two months, as Italy has navigated its second wave of COVID-19, Scientologists of Milano have once again reached out to help.

They began with an outreach campaign. In coordination with local authorities, they printed and posted notices in shops and residences offering their services to vulnerable neighbors—the elderly and the ill, those under quarantine or in isolation. They volunteered to purchase supplies and prescriptions and drop them off safely at their homes. Anyone in need was invited to contact the Volunteer Minister hotline.

As requests started pouring in, the men and women in the bright yellow jackets responded to every one of them.

Then as the holidays approached, they collected and distributed warm clothing and Christmas gifts to needy families.

Scientology Volunteer Ministers throughout Italy have earned the reputation over decades of being there for their communities in times of crisis or need. Whether responding to natural disasters such as the L'Aquila and Amatrice earthquakes or by working as civil defense specialists through Pro.Civi.Co.S—the Civil Protection Team of the Scientology Community—Volunteer Ministers from towns and cities throughout Italy are always on call in times of disaster great and small.

The Church of Scientology Volunteer Ministers program is a religious social service created in the mid-1970s by Scientology Founder L. Ron Hubbard. It constitutes one of the world's largest independent relief forces.

With the events of the 9/11 terrorist attacks in New York City, Scientology ecclesiastical leader Mr. David Miscavige called on Scientologists to redouble their efforts to aid their fellow man. He issued a directive entitled "The Wake-Up Call," which inspired astonishing growth within the Volunteer Minister program.

The following year, Volunteer Ministers of Italy formed Pro.civi.co.s, which was entered into the registry of the National Department of Civil Defense.

A Volunteer Minister's mandate is to be "a person who helps his fellow man on a volunteer basis by restoring purpose, truth and spiritual values to the lives of others." Their creed: "A Volunteer Minister does not shut his eyes to the pain, evil and injustice of existence. Rather, he is trained to handle these things and help others achieve relief from them and new personal strength as well."