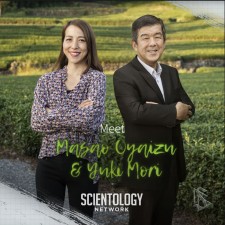 LOS ANGELES, December 26, 2019 (Newswire.com) - ​​Scientology Network’s MEET A SCIENTOLOGIST, the weekly series spotlighting the everyday lives of Scientologists from around the world and all walks of life, announces an episode featuring green tea entrepreneurs Masao Oyaizu and Yuki Mori.

Masao Oyaizu and Yuki Mori are on a mission to preserve and share a cherished part of Japanese culture — the tradition of green tea. The history of this venerated beverage dates back to 13th-century Japan. Blending heritage with modern innovation, Masao and Yuki brewed up an international company, ensuring the sun will always rise on Japan’s beloved green tea.

Masao Oyaizu was born in the shadow of Mount Fuji in Shizuoka City — an area known for producing the highest-quality green tea leaves in Japan. Raised in the family business, Masao learned to grow green tea leaves the old-fashioned way. As the tradition of the tea ceremony was replaced by the convenience of bottled green tea, Masao blended his talents with Yuki Mori. Together, they infused an ancient tradition with modern flair. Out of this unique pairing grew their 17-layer green tea cake and signature gold leaf green tea gelato, popular with tourists and a social media sensation. Today, their company Oyaizu Seicha International Japanese Tea is recognized the world over as a purveyor of green tea and mouthwatering green tea desserts — with distribution across England, France, Hong Kong, India, Japan, Singapore, Taiwan, Thailand, Vietnam and the United States. And so the sun rises on Masao and Yuki, who have preserved a bit of old Japan by building a modern empire.

The Scientology Network debuted March 12, 2018. Since launching, the Scientology Network has been viewed in 240 countries and territories in 17 languages. Satisfying the curiosity of people about Scientology, the network takes viewers across six continents, spotlighting the everyday lives of Scientologists, showing the church as a global organization and presenting its social betterment programs that have touched the lives of millions worldwide. The network also showcases documentaries by independent filmmakers who represent a cross-section of cultures and faiths but share a common purpose of uplifting communities.