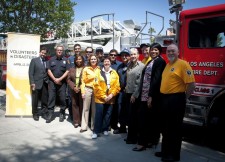 Washington, D.C., September 15, 2016 (Newswire.com) - Leaders of the Los Angeles County Interfaith Clergy Coalition were honored September 13 at a special presentation at the White House for their work to promote disaster preparedness to ensure the safety of the entire community.

Accepting the awards were:

The devastating 2005 hurricane season and the destruction leveled by Katrina, Rita, and Wilma made it clear that greater community engagement was needed to see to preparedness and deal with disasters.

The White House Office of Faith-based and Neighborhood Partnerships was created by executive order to coordinate these efforts, under the direction of the Department of Homeland Security and the Federal Emergency Management Agency.

It works to build bridges between the federal government and nonprofit organizations, both secular and faith-based, to better serve Americans in need.

In launching the office in February 2009, President Obama said, “There is a force for good greater than government. It is an expression of faith, this yearning to give back, this hungering for a purpose larger than our own, that reveals itself not simply in places of worship, but in senior centers and shelters, schools and hospitals…"

The program was set up as a resource for nonprofits and community organizations seeking to make a bigger impact in their communities, so they may learn their obligations under the law, cut through red tape, and make the most of federal resources.