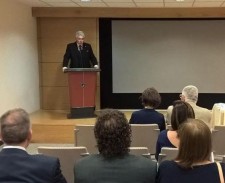 An open house on environmental issues focused on the connection between environmental crime and morality and a humanitarian program the Church supports to instill moral values.

Rome, Italy, July 12, 2016 (Newswire.com) - A community open house held in one of the seminar rooms at the Church of Scientology of Rome promoted the importance of environmental responsibility. Emceed by the Church’s Social Reform Officer, speakers discussed environmental issues from their own unique perspective. They included a professor of philosophy and sociology, an attorney, and a retired police officer.

According to the United Nations’ World Environment Day (WED) website, the dollar value ​of eco-crime outstripped illegal trade in small arms this year at an estimated $258 billion. This is 26 percent higher than previous estimates.

It was clear from each of the presentations at the forum that environmental irresponsibility is first and foremost a moral issue—a matter of personal choice. No matter how many regulations and laws exist, without a moral compass there is nothing to restrain people from destroying the natural resources we hold in trust for future generations.

To address this and other pressing moral issues, the Church supports distribution of The Way to Happiness—a nonreligious moral code based entirely on common sense. Written in 1981 by author, humanitarian and Scientology Founder L. Ron Hubbard and published in 111 languages, it fills the void in an increasingly immoral society.

The Church of Scientology and its members are proud to share the tools for happier living contained in ​The Way to Happiness with all who seek to create a better world.