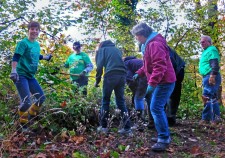 Seattle, Washington, October 27, 2016 (Newswire.com) - ​In celebration of national Make A Difference Day, Seattle’s Scientology Environmental Task Force and the Seattle chapter of The Way To Happiness Foundation teamed up to clear invasive plants out of Kinnear Park. Volunteers spent the day beautifying the official city landmark that stands as one of Seattle’s oldest parks.

Seattle’s parks are a point of pride for the city that is known for its sustainability programs and its care for the environment, and the Church of Scientology is a committed partner in this endeavor.

"If every neighborhood in America created an environmental task force of even just a dozen people, that would be at least 5 million people working on a common purpose to keep America green."

“We adopted Kinnear Park 16 years ago to ensure that one of Seattle’s most beautiful parks was well maintained and improved and we’ve been proud to work closely with the Seattle Parks and Recreation in our volunteer efforts,” says David Scattergood, coordinator of Seattle’s Scientology Environmental Task Force. “Giving service to others and ensuring that we are good environmental stewards is a watchword of both The Way to Happiness Foundation and the Task Force.”

The work of both groups was inspired by The Way to Happiness, the nonreligious guide to better living written by author, humanitarian and Scientology Founder L. Ron Hubbard.

Precept No. 12 of The Way to Happiness is “Safeguard and improve your environment.” Mr. Hubbard wrote, “There are many things one can do to help take care of the planet. They begin with the idea that one should. They progress with suggesting to others they should. Man has gotten up to the potential of destroying the planet. He must be pushed on up to the capability and actions of saving it.”

For over 25 years, the Scientology Environmental Task Force has been working to beautify Seattle area streets and parks, painting out graffiti and creating murals in the community. The Task Force and The Way to Happiness Foundation have contributed thousands of hours of volunteer time to create a more sustainable environment.

Volunteers from across the country unite each year on Make A Difference Day, one of the largest single annual days of service nationwide. Since 1992, volunteers and communities have come together on this with a single purpose: to improve the lives of others.