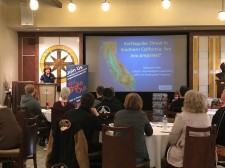 The Volunteer Ministers of Pasadena organize a seminar to help the community cope with earthquake disaster.

The presentation was an introduction to the science of earthquakes: what they are and how they work. It gave some of the history of earthquakes, particularly here in Southern California, and it dispelled the myth that one can forecast when the next “big one” may occur based on data about previous quakes.

The 1994 Northridge quake provided information useful in preparing for future earthquakes. For instance, the number-one injury in the quake was not from falling objects, but from people cutting their feet on broken glass when they jumped out of bed, so have a pair of heavy shoes available as a preventative measure.

They also covered Shake Alert — an early-warning system planned for the U.S. West Coast. Though no one can predict earthquakes, the technology exists to provide a warning to surrounding communities once a quake begins. This technology is in use in Mexico City but has not yet been implemented on the U.S. West Coast.

The second part of the presentation was from the Earthquake Country Alliance and showed the “Seven Steps to Earthquake Safety” that can be found on their website: earthquakecountry.org.

The open house focused on being prepared for self and family and then knowing what to do to help others.

Scientology Volunteer Ministers from the Church of Scientology Pasadena responded to the Northridge earthquake and provide help to those affected by local fires and mudslides and in numerous other disasters, including the 9/11 terrorist attack, the Haiti earthquake of 2010 and hurricanes including Rita, Katrina and Harvey.

L. Ron Hubbard wrote: “If one does not like the crime, cruelty, injustice and violence of this society, he can do something about it. He can become a Volunteer Minister and help civilize it, bring it conscience and kindness and love and freedom from travail by instilling into it trust, decency, honesty and tolerance.”