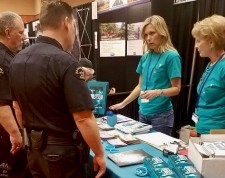 Foundation for a Drug-Free World Colorado chapter brings the truth about drugs to the Colorado Sheriff's Departments' statewide annual convention.

LOVELAND, Colo., January 17, 2019 (Newswire.com) - Sheriff’s deputies arriving at the County Sheriffs of Colorado 2019 Winter Conference in Loveland, Colorado, January 9 were once more welcomed by Foundation for a Drug-Free World volunteers, whose drug prevention methods were featured there for the third consecutive year.

More overdose deaths were reported in Colorado in 2017 than in any previous year, making it clear that effective drug education is a necessity. And law enforcement plays a vital role.

Dressed in their signature aqua T-shirts, the volunteers, led by executive director Angela Marion, provided drug education materials to visitors to the Foundation’s booth throughout the two-day conference.

“Law enforcement around our beautiful state risk their lives daily to keep us safe,” said Marion. “They are all faced with the consequences of rampant drug use.”

Sheriff’s department staff visited the booth to peruse the material and talk with the volunteers.

“Drug education that goes beyond ’just say no,’ is vital,” says Marion, “and the material the Foundation for a Drug-Free World offers is invaluable. It teaches kids and their parents what drugs do and the consequences of taking them.”

Foundation for a Drug-Free World material is offered free of charge to anyone wishing to provide drug education.

“Our team is committed to reaching youth before they begin to abuse drugs, and deputy sheriffs, school resource officers, and other law enforcement personnel are key to reaching as many young people as possible,” says Marion. “Back when the drug culture was beginning to take hold in society, Scientology Founder L. Ron Hubbard described drugs as ’the single most destructive element present in our current culture,’ and we see the truth of this statement constantly in our work.”

The Church of Scientology and its members support the Foundation for a Drug-Free World, a secular nonprofit corporation that empowers youth and adults with factual information about drugs so they can make informed decisions to live drug-free. The Foundation’s Truth About Drugs campaign is one of the world’s largest nongovernmental drug education and prevention initiatives. As shown on a program on the Scientology Network, this support makes it possible for the Foundation to provide drug education booklets, videos and educator guides free of charge to teachers, mentors and civic and community leaders. 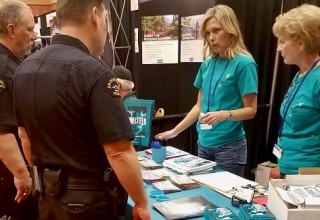 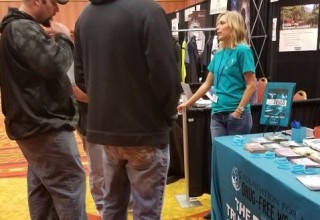