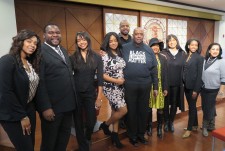 Church of Scientology Harlem Community Center hosts first Annual Dean Charles Hamilton Houston Conference, named for the man whose strategy paved the way for Thurgood Marshall to prevail in Brown versus Board of Education.

Jim Crow refers to laws requiring the separation of “persons of color” from whites in public transportation and schools, parks, cemeteries, theaters, and restaurants. The decision in Brown vs. Board of Education declared state laws establishing separate public schools for black and white students unconstitutional, overturning the Plessy v. Ferguson decision of 1896, which allowed state-sponsored segregation. Brown versus Board of Education was the beginning of the end of all such laws.

Houston sought to obtain for all people of color the rights guaranteed by the 14th Amendment to the U.S. Constitution: equal protection under the law. The conference pointed out that to accomplish this goal requires more men and woman of color to be admitted to the bar.

The conference, attended by attorneys, law students and the general public, was held by Black Lawyers Matter Legal Defense Fund, Inc. (BLMLDF), which seeks to increase the number of minority lawyers practicing in America today because the lack of equal representation can lead to violations of the 14th amendment.

A 2011 study of the New York County District Attorney’s office (DANY) found black defendants are 19 percent more likely than white defendants to be offered plea deals that include jail or prison time. Black people charged with misdemeanor offenses or drug offenses are also more likely to be held in jail or prison at their arraignment.

A 2012 American Bar Association study found that in 2010, 88.1 percent of American lawyers were White non-Hispanic. Only 4.8 percent are black.

An NAACP Criminal Justice Fact Sheet shows that in America:

The Black Lawyers Matter campaign seeks to rectify this situation by raising funds for scholarships for aspiring young law students of color, so they may pursue their goals to become attorneys.

The Church of Scientology Harlem Community Center co-organized the conference in keeping with its commitment to support programs to benefit the community and ensure the human rights of all individuals. Inspired by the principles expressed by Scientology Founder L. Ron Hubbard, Scientologists and the Church of Scientology support United for Human Rights and its program for young people, Youth for Human Rights International. Mr. Hubbard stated: “It is vital that all thinking men urge upon their governments sweeping reforms in the field of human rights.”