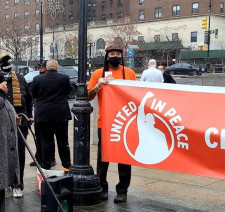 NEW YORK, December 16, 2020 (Newswire.com) - Violence has surged this year and New York City police report 115 shootings last month compared to 51 in November 2019. On behalf of the United for Peace Foundation, Reverend Phil Hargrow of the Church of Scientology of Harlem and a team of volunteers marched to the Bronx Borough Courthouse, where they joined other community and faith leaders in a rally to stop the bloodshed.

"We are not going to allow violence to become the new normal in our streets," said Hargrow.

According to the Bronx Times, the rally was the brainchild of Marion Frampton, founder of TBS New Direction Mentoring Program, a nonprofit that works with former gang members. Frampton wants clergy of all denominations to come together to bring attention to and help find a solution to this problem.

United in Peace Foundation is a popular movement to bring peace to our inner cities. It began in Los Angeles in 2012 and the Harlem chapter of United in Peace was formed in 2017.

United in Peace volunteers give out copies of the 1995 Million Man March Pledge and The Way to Happiness, a common-sense moral code written by humanitarian L. Ron Hubbard whose precepts are embraced by people of all faiths. Law enforcement and government leaders have recognized and acknowledged reductions in violence and crime rates in neighborhoods visited by the Peace Rides.

For more information about United in Peace, watch a TV episode covering the movement on Voices for Humanity. To learn more about the Church of Scientology and Community Center of Harlem, watch Destination Scientology: Harlem. Both are available on the Scientology Network at DIRECTV 320 or online at www.scientology.tv.

The founder of the Scientology religion is L. Ron Hubbard and David Miscavige is the religion's ecclesiastical leader.