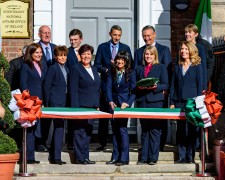 Dublin, Ireland, October 16, 2016 (Newswire.com) - Over the centuries the nation of Ireland has served as a fountainhead of culture, poetry and art for Western Civilization. At the heart of that cultural outpouring is the City of Dublin and within its urban core stands a place whose history-soaked streets present a striking representation of it all—the majestic Merrion Square.

That legendary location was the site of a festive ribbon-cutting and open house event on Saturday, October 15, at Number 4 Merrion Square North. The landmark facility stands as the new home of the Church of Scientology National Affairs Office of Ireland and was officially opened by Church executives and staff.

The new National Affairs Office is just blocks from some of Ireland’s most renowned national monuments that include the National Gallery, the National History Museum, Trinity College and Leinster House, seat of Parliament. A classic example of some of Dublin’s finest Georgian architecture, the historic building dates back to the 1760s—well before the birth of the American democracy, and before the great migration of Irish families to those western shores. Now, more than two centuries later, it has become home to the Church’s expanding mission within Ireland.

“By opening the doors of the Church of Scientology National Affairs Office for Ireland, we are continuing in the tradition of our Founder L. Ron Hubbard who himself held an office at 69 Merrion Square,” said David Miscavige, Chairman of the Board of the Religious Technology Center and ecclesiastical leader of the Scientology religion. “And we do so with the intent to offer our humanitarian initiatives to all in honor of our Founder and the Aims of Scientology—a civilization without insanity, without criminals and without war, where the able can prosper and honest beings can have rights, and where man is free to rise to greater heights.”

In fact, in February of 1956, when L. Ron Hubbard first arrived in Dublin’s Merrion Square to create The American College of Personnel Efficiency—a model for the first introductory course in Scientology—he observed that the Irish winter was lingering. “If the weather is cold, the Irish heart is warm,” he wrote. “The country and the people could not be improved upon.”

So it is that the location of this architecturally historic and beautifully restored facility reflects the reverence and respect that Mr. Hubbard felt for both the Irish people, and the magnificence of the Emerald Isle they call home. In that vein, the new National Affairs Office is devoted to Ireland in carrying the hope for a better world, for happier lives, and in sharing the practical solutions that turn those hopes into reality. These philosophies have been at the heart of the Church’s worldwide social missions since it was established more than a half century ago.

Modeled after Scientology’s National Affairs Office of Washington, D.C.—which was established in 2012 to facilitate cooperation between American political and cultural leaders and the Church’s social and humanitarian objectives—the facilities in Dublin are similarly designed as a center for the Church’s outreach across Ireland. Through these offices, the Church will assist in meeting both physical and spiritual needs, and in addressing social ills from drugs, to poverty to homelessness.

Headquartered in America, the Church of Scientology has grown into a worldwide institution dedicated to engendering respect for human rights and creating a world free of debilitating social ills. To that end, on any given day, tens of thousands of Scientologists are working on every continent on earth. Those who explore what Scientology offers in a troubled world find that these many missions are nurtured and enhanced through extensive partnerships with other faith-based and interfaith programs, international humanitarian groups, schools, police, local government and civic organizations—all working together to support and uplift all communities while protecting religious and personal freedoms. The evidence of success can be seen in the prolific expansion of the Church over the past few decades under the guidance and direction of Mr. Miscavige.

The Church of Scientology National Affairs Office of Ireland seeks to share with the Irish people both the work of the Church and its humanitarian ideals. From the offices in Merrion Square the Church will coordinate its many charitable and humanitarian campaigns. They include efforts to battle drug addiction, increase rights awareness, improve scholastic performance and educational opportunities for children, reduce crime and prison recidivism, underpin character building, and to employ the tools, expertise and technology that the Church’s Volunteer Minister program has developed through decades of disaster relief and community service—affecting millions of lives around the world.

The National Affairs Office features an information center complete with interactive programs and visual displays where visitors can learn about Scientology’s social betterment and humanitarian programs, and much more. The Center’s state-of-the-art technology allows for vivid and detailed illustrations of the religion’s basic tenets and of its goals for peace, health and happiness among all peoples. These materials detail the Church’s extensive work in promoting religious tolerance and understanding, in encouraging spiritual awareness, and in helping develop the interfaith cooperation that builds communities and strengthens respect for all persons. Information about the Church’s work towards a drug-free world, towards educational opportunities and a more peaceful existence are found in the Information Center.

Viewers can also witness, through video presentations, the impact of the Volunteer Ministers’ extensive network and outreach efforts, helping illustrate how the National Affairs Office of Ireland can effectively offer guidance and provide collaboration towards improved lives and healthier communities.

The Church recently opened Scientology Media Productions as well, a five-acre, technologically cutting-edge studio in Hollywood, California, in which the religion’s message will be disseminated via television and radio broadcasting, Internet and social media and every other media platform.

More Church openings are planned in the next 12 months for cultural epicenters in New Zealand, Europe, Latin America and North America.