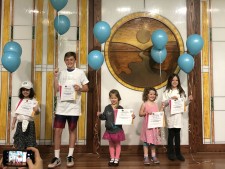 PASADENA, Calif., April 4, 2019 (Newswire.com) - The Church of Scientology Pasadena awarded commendations to a group of children who organized and carried out a neighborhood cleanup in Old Town.

They were inspired by a workshop on The Way to Happiness, the common-sense guide to better living written by humanitarian and Scientology Founder L. Ron Hubbard. After watching a video based on the precept “Safeguard and Improve Your Environment,” they decided to put what they learned into action.

The precept introduced them to the concept of environmental responsibility. It states:

“The idea that one has a share in the planet and that one can and should help care for it may seem very large and, to some, quite beyond reality. But today what happens on the other side of the world, even so far away, can affect what happens in your own home.

“There are many things one can do to help take care of the planet. They begin with the idea that one should. They progress with suggesting to others they should.”

They decided to go on a “litter hunt,” looking for food wrappers, empty cups, anything left behind by the hundreds of people who visit the popular district.

When they returned to the Church they were greeted with balloons, snacks and commendations for their work.

The Way to Happiness has been embraced by more than 250,000 groups and individuals, with some 117 million copies distributed in 186 nations. It holds the Guinness World Record as the single most-translated nonreligious book and fills the moral vacuum in an increasingly materialistic society. The Church of Scientology and its members are proud to share the tools for happier living contained in The Way to Happiness.

Church of Scientology Pasadena, Safeguard and Improve Your Environment, The Way to Happiness