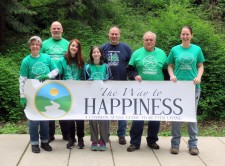 Invasive species are such a problem in the State of Washington that in 2006 the legislature established the Washington Invasive Species Council and tasked it with providing policy-level direction, planning, and coordination for combating these plants and animals throughout the state and preventing the introduction of others that are potentially harmful.

Invasive species alter the natural cycle of forestation by hampering the ability of native trees and shrubs to repopulate themselves. The end result of allowing these infestations to continue is a reduction of the natural forests, impacting both wildlife and the environment.

Over the past few years, Kinnear Park, one of Seattle's oldest green spaces, has undergone several significant renovations to the landscape to open up visibility within the park and allow for a safer, more user-friendly environment for the neighborhood. Volunteers from The Way to Happiness Foundation and the Scientology Environmental Task Force have spent hundreds of hours improving both upper and lower levels of the park during the latest round of renovations.

In celebration of Earth Day, Dave Scattergood, forest steward and coordinator of the Task Force, had the volunteers concentrate on the large bed near the park entrance. He described it as "in severe need of weed control. We undertook a clean-up of this bed to bring it back to its original intended design and look."

A yearround activity, Scattergood says "the volunteers work to keep the park free of invasive species which hamper the ability of the forest to reestablish itself and maintain the natural look the park is known for. We hold regular work parties to remove these nuisance plants throughout the greater park area."

The Foundation and the Task Force use The Way to Happiness to promote awareness of the need to care for the environment and encourage others to take part in the work of keeping Seattle green. The Way to Happiness is a nonreligious commonsense moral code written by author and humanitarian L. Ron Hubbard. One of its precepts is "Safeguard and Improve your Environment":

"There are many things one can do to help take care of the planet. They begin with the idea that one should. They progress with suggesting to others they should. Man has gotten up to the potential of destroying the planet. He must be pushed on up to the capability and actions of saving it."

The Scientology Environmental Task Force of the Church of Scientology Seattle has been part of the Seattle Public Utilities "Adopt-A-Street" program since the initiative's inception in the late 1980s. Adopting Kinnear Park 16 years ago, they have contributed thousands of volunteer hours to its upkeep and beautification.