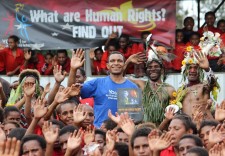 Unlawfully detained and beaten by police, a New Guinea activist is reforming the system through human rights education.

KARENDA, PAPUA NEW GUINEA, September 7, 2016 (Newswire.com) - Augustine Brian was born in Papua New Guinea in the village of Karenda, a place steeped in superstition. But as primitive as some of the villages are in the remote Southern Highlands of the country, Karenda elders believed in education, and his village invested in sending Brian to Port Moresby, the capital city, where he graduated from college.

Brian became a provincial project coordinator for World Vision, a global Christian relief, development and advocacy organization, and returned home to take on a leadership role in his community and to mentor youth.

Then, in 2013, he came face to face with the flaws in the system when he was unlawfully detained and beaten by rogue cops. And although his injuries left him incapacitated for several months, and despite his identifying and pressing charges on those who abused him, the officers were never brought to justice.

Brian decided to pursue reform rather than revenge, and searching online, he found the website of United for Human Rights and ordered the educator package. When it arrived, he studied the materials and gained a deep appreciation for human rights and the urgency of raising awareness of these rights throughout his country. Not only could it address police brutality but a host of other human rights issues. Papua New Guinea has one of the highest crime rates internationally. Nearly half the population is illiterate and living in poverty.

He met with his village elders and showed them the Youth for Human Rights public service announcements and The Story of Human Rights documentary. They saw the importance of the program and gave their approval for Brian to share this knowledge with the village, authorizing him to launch the initiative at a six-day religious event that was about to take place.

He then took the program to nearby villages and from there to the provincial capital of Mendi, where he spoke to community leaders and school principals and organized a human rights march through the city. More than 2,500 people participated in the march with its message of unity and equality.

Throughout the region, schools adopted the program, and Brian continued conducting workshops across the province. Even in primitive villages with no electricity, he would gather the schoolchildren around his laptop to watch the videos.

But from his own experience, Brian knew that to make human rights a reality, he would have to bring the police on board. He gathered petitions and brought them to the provincial police department. Senior officers requested a seminar and extended a heartfelt apology for the brutality he suffered and the department’s failure to right the wrong. He is now partnering with the police to deliver human rights education to every officer in the province.

The Church of Scientology supports United for Human Rights and its program for youth, Youth for Human Rights International. Scientologists on six continents engage in collaborative efforts with government agencies and nongovernmental organizations to bring about broad-scale awareness and implementation of the 1948 United Nations Universal Declaration of Human Rights, the world’s premier human rights document.